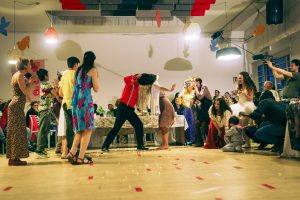 Transformation reveals things that are already there but that society is not yet able to see.

We have just come back from Turin, Italy, where we attended the first major festival in the context of the EU project Caravan Next. We presented our tried and tested project Theatre Tables, together with a varied group of participants from Turin and additional input from ZID’s Sebo and Lara Bakker.

The buzzword of the festival was transformation, which comes from a Latin word that means change. It nicely sums up the impact and essence of community art, which is what ZID is making, after all.

Turin is like Amsterdam in many respects. It is an old city with a beautiful historic centre and street artists performing in the main square in front of the Palace. And of course it has neighbourhoods far away from the city centre that clearly reflect the social, economic and ethical background of the residents. As in other large cities, there is a clear division between inner and outer circle and this divided city is waiting for a transformation too.

The question is: what transformation?

We were staying in a neighbourhood that is in many ways comparable to Bos en Lommer or Slotermeer in Amsterdam West. In the course of the work process, which already started in February, various groups of participants who were either involved in the community centre or the neighbourhood itself came to the workshops organised by ZID. It was a mix of people from various ages and cultural backgrounds who had not really met before. Young Italian theatre makers and recently arrived refugees from Senegal; Russian families, elderly artists who had not performed for many years and had fallen on hard times; and terrifically motivated young people involved in art and culture in their own way. It was this last group that surprised us the most: a subculture that combined a living as street artist with learning, working, travelling and creating their own stage in the city. Are they the ones who will transform this city?

Ivana, a young Roma dancer; Iranians students playing beautiful traditional instruments; Rachid, Ivana’s brother and first-class puppeteer; Domenico, a very talented and versatile percussionist; Eleonora, student/ballet dancer; and Osny, a student from Senegal who turned out to be a top hip-hop dancer in his native country. Together they made up an incredibly colourful, high-spirited and talented group of twentysomethings that seem to have no place in this city, no stage, no theatre. Therefore they turn the city square into their stage, presenting wonderful performances at sunny days until late at night.

After a number of workshops divided over several visits by our theatre makers Sebo Bakker and Daan Bosch this community event was presented to a full house on 31 May. The audience, part Italian, part international with people from 12 countries was in awe of this group’s powers and talents and their personal way of performing and storytelling. There was a great atmosphere of solidarity.

What we actually did that night is to make all those present experience for a brief moment what the chances and opportunities of transformation are in the cities of Europe. Opportunities, indeed, because they can only be realised when all of us, with all of our talents and dreams, can have or take our place in this.